Cranstoun Response to Drug Deaths in England & Wales in 2021

Today the Office for National Statistics released their figures for drug related deaths in England and Wales covering the year 2021. The statistics tragically revealed that drug deaths have risen for the ninth consecutive year, with a sharp increase of 6.2%. Drug poisoning deaths have shockingly risen over 80% in the last decade, comparing the rate to 2012.

A total of 4,859 deaths related to drug poisoning were recorded in 2021, tragically the highest figure on record again, as the drug deaths crisis continues to spiral. Once again the North-East of England is the most negatively affected area in England and Wales, tragically seeing the highest proportional number of deaths.

Cocaine deaths worryingly continue to surge with 840 people dying in 2021, an 8.1% increase compared to 2020. Comparing this to 2011 data, this marks a seven-fold increase in just over a decade, when 112 people died from a cocaine related death. It is worth noting that whilst cocaine deaths shockingly continue to rise rapidly, there is no breakdown between deaths related to powdered cocaine or smokable crack-cocaine.

Meanwhile, around half of the deaths recorded involved an opiate, which is significantly lower than the opiate-related figures in Scotland just last week for the same year, where 84% of deaths involved opiates. 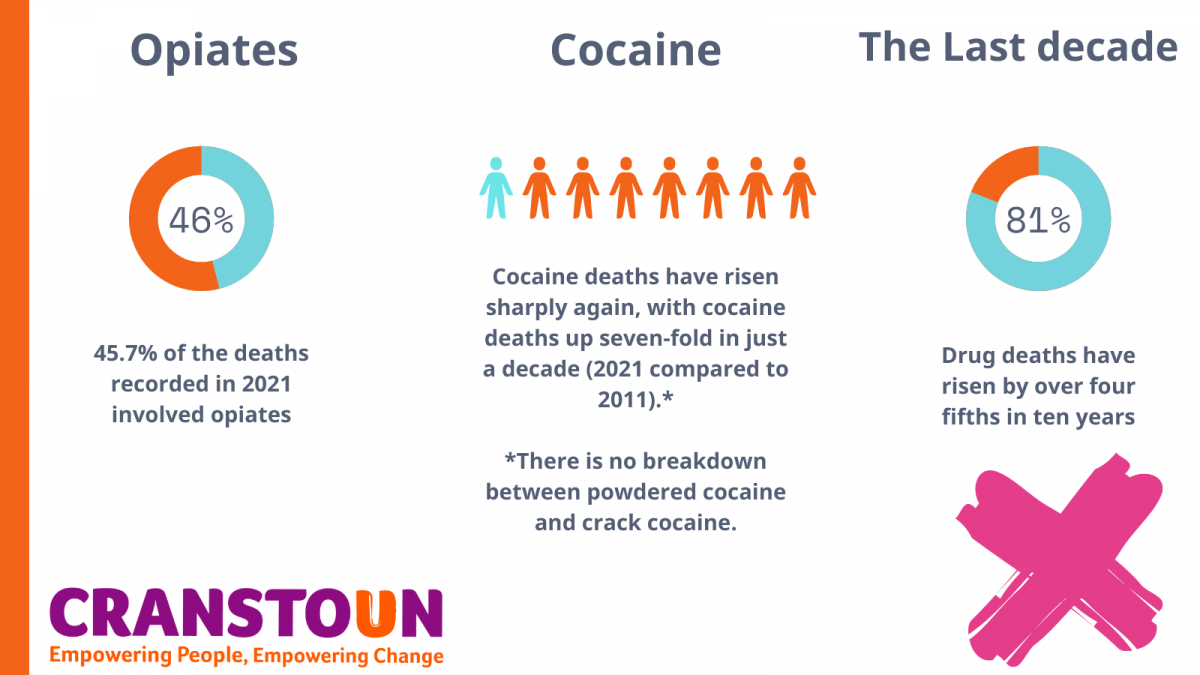 In terms of age, those born in the 1970s (aged 40-44 and 45-49) continue to sadly hold the highest proportional drug rate among any age group, which has consistently been the case for 25 years. Meanwhile, over twice as many men died from a drug related death, compared to women, in 2021.

There is also a worrying trend in relation to New Psychoactive Substances, with 258 deaths last year compared to 137 in 2020 – a shocking increase of over 88%. This is likely caused by a rise in new, unknown benzodiazepines which are analogues to the traditional benzos known to health and treatment professionals.

Firstly, Cranstoun would like to extend our condolences and sympathies with those who have been affected by a drug death in 2021, or ever. The enormous pain and suffering is truly tragic, and we will continue to try to reduce this suffering through our work.

With another unprecedented year of drug deaths tragically destroying the lives of thousands of families and loved ones across the country, today’s figures demonstrate the desperate need for more action to be taken to reduce the number of drug related deaths across the United Kingdom.

Cranstoun understands the need for an all-encompassing response, that considers the nuances and various factors that lead to tragic deaths. Through our services, we witness the harms caused by drugs – which could often be reduced – on a daily basis. Whilst each of our services have a drug death rate lower than the national average, there is much more that could be done through legislative change, the furthering of deprioritisation agreements, and a joined up response between services to ensure that people are getting the support that they need or want.

Cranstoun is calling for a Whole System approach to break the cycle of drugs, criminality, prison and fatalities, by instead focusing on the delivery of world class services. Measures which are implementable immediately must be taken to reduce these tragic figures. A holistic, Whole System approach covering diversion, arrest referral, harm reduction equipment (such as injecting equipment provisions and more access to Naloxone) and education must be at the heart of the response. 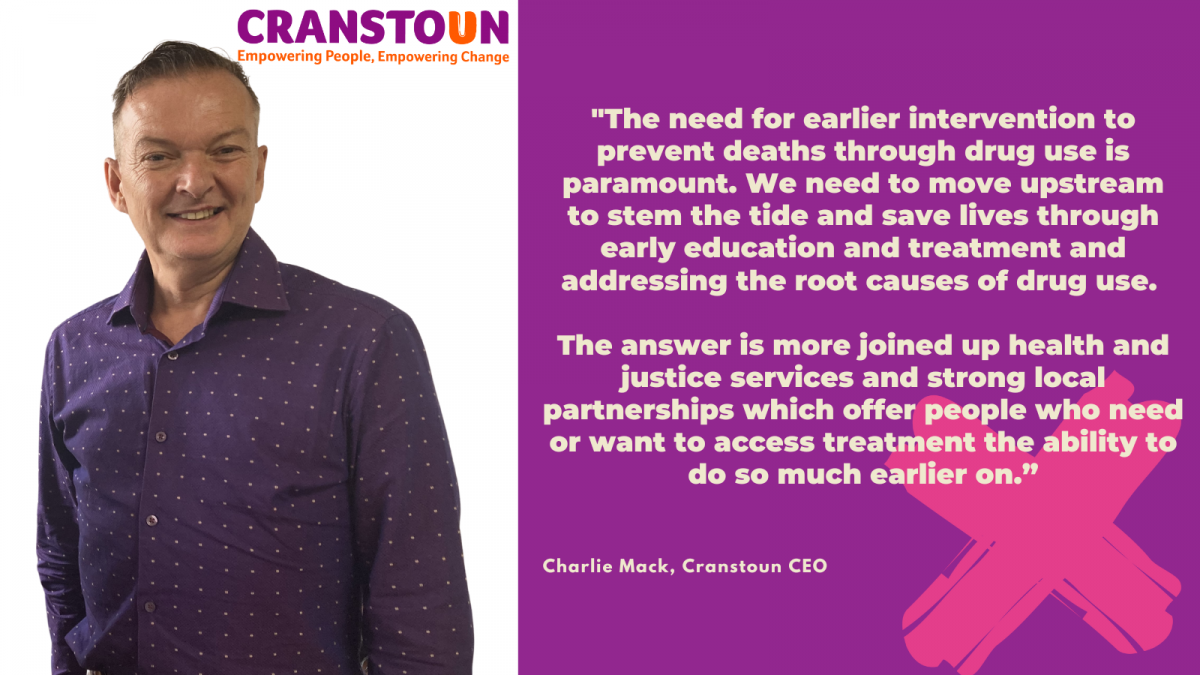 There must be a suitable intervention to reduce harm at any point of the journey. This could be accommodation and support for someone who has just been released from prison to ensure that they are given every opportunity to rebuild their lives successfully (as demonstrated in our Sandwell service here), or ensuring that a young black man from a deprived-background does not receive a criminal record for a minor drug offence in their teens. We must support people at every stage of their journey.

Whilst each type of drug and incident requires a different response, a multi-faceted approach with harm reduction at its core is the key to reducing the tragic number of people losing their lives to drugs every year in the United Kingdom.

Cranstoun has also been calling for the implementation of a pilot Overdose Prevention Centre in Scotland, and we firmly believe that this is something that should also be under consideration in the rest of the UK, particularly in areas with a high number of injection-related deaths. An OPC would form part of the Whole System approach, by keeping people who inject drugs alive whilst also engaging people who ordinarily would not engage with services. By providing these people with harm reduction advice, education and safer injection equipment, we can make a meaningful impact on drug deaths, and start to reduce this horrific number. With an estimated 200 in operation, across 14 countries, this is not unchartered territory but an evidence-based solution to a deepening crisis.

Service providers across the UK must also look beyond this country for best practice, and emerging evidence-based solutions that exist across the globe. Cranstoun is currently developing a smartphone app, BuddyUp, which will help to ensure that people who inject drugs are not doing so alone. The idea has been developed in Canada, and we believe that this could be a useful tool in the United Kingdom to reduce deaths.

There is no panacea that will stop the tragic deaths, suffering and hardship that drugs – and some policy approaches to drugs – cause every year in the UK. As providers, we must continue to follow the evidence and lobby for meaningful change that we know will work. Cranstoun is committed to not only delivering world class services, but to improving policies and calling for legislative change that we know would help to reduce the tragic number of drug related deaths. A Whole System approach, with harm reduction and support at its core – not criminalisation – must be at the heart of the response.