Polling commissioned by the APPG for Drug Policy Reform and carried out by Redfield and Wilton Strategies has today revealed a fascinating insight into public attitudes towards drugs, and the policing of drugs, in the UK. Redfield conducted 1,500 interviews nationally, and an additional sample of interviews specifically with ‘Red Wall’ seats which were won by the Conservatives from Labour in 2019.

The key headlines from the poll, which can be found here, reveal that:

As highlighted above, the poll shows strong support for overdose prevention centres, with nearly 1 in 2 (49%) in favour, only 18% opposed, and the remainder either didn’t know (9%) or were neutral (24%) on the subject. Cranstoun has been campaigning for the implementation of a pilot hybrid-model OPC in Dundee, and the lack of public opposition to the globally-evidenced centres is encouraging for researchers; and should give parliamentarians confidence in following the evidence, when Parliament returns from recess next month. Parliamentarians from nearly all major parties – 28 MSPs in total – signed our OPC pledge in June, and we hope these findings may help to accelerate implementation. 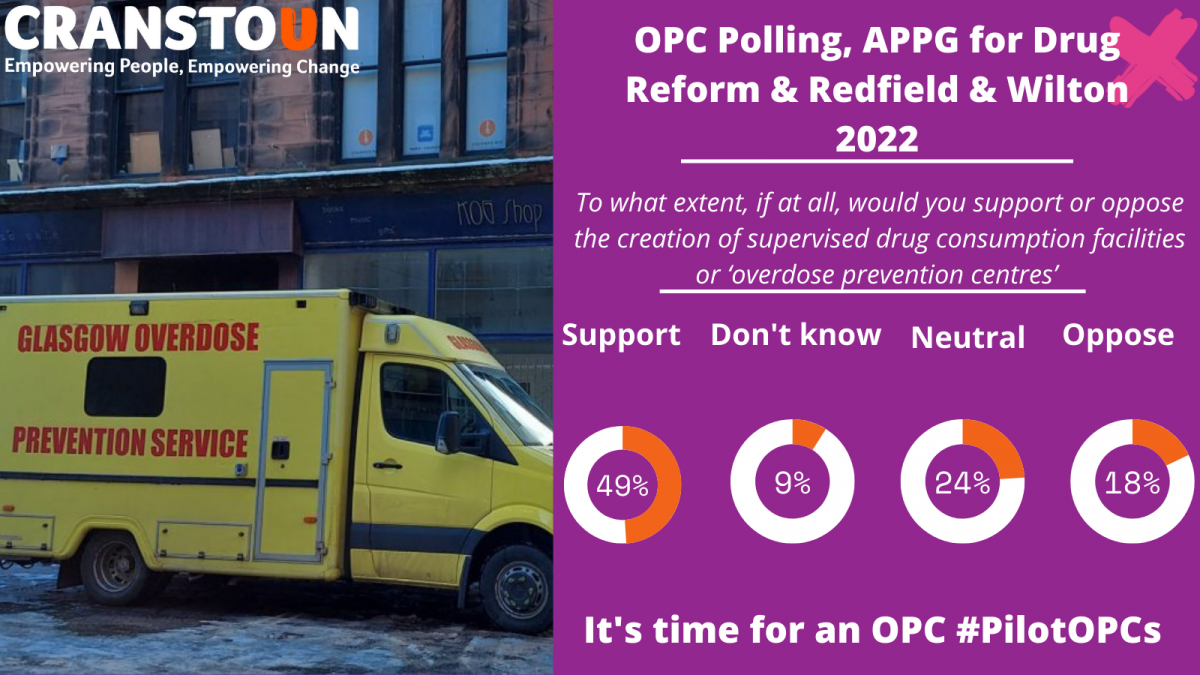 Also encouraging is the finding that the most popular choice of outcome from the public, for someone who is found in possession of a small amount of illegal drugs for personal use, was for mandatory education or treatment. More than half of the respondents (54%) supported this over other options – such as financially punitive measures (49%), with 1 in 5 (20%) supporting custodial punishments. The result highlights the public appetite for alternatives to costly criminal sanctions for small possession offences, and the DIVERT scheme we deliver for Police and Crime Commissioners in both the West Midlands and West Mercia, provides an evidence-based model for which to follow.

Cranstoun champions alternatives to a criminal record for possession offences, and works to provide solutions which instead aim to address the root causes of issues through education and treatment, where appropriate. Often a criminal record can be more harmful than the substance itself for the person caught in possession. Our data shows that this approach saves taxpayer money, cuts reoffending and offers those caught in possession an alternative to costly criminal records which can blight the livelihoods of people. According to today’s poll, a wider roll out of DIVERT would be popular with the public too.

Schemes that place mental health or addiction advisers in police stations who would give advice to arrestees with drug problems and refer them to treatment – such as the Cranstoun Arrest Referral Service – also proved very popular with the public. Over 2 in 3 polled were in favour (67%) with only just over 1 in 20 opposed (6%). This strong public support comes just weeks after the Swift, Certain, Tough White Paper was published by the government, you can read our response to that here.

Whilst support drops to 38% for formal decriminalisation of possessing certain drugs (as opposed to deprioritisation agreements and diversion), this is still more popular than those in opposition (30%). 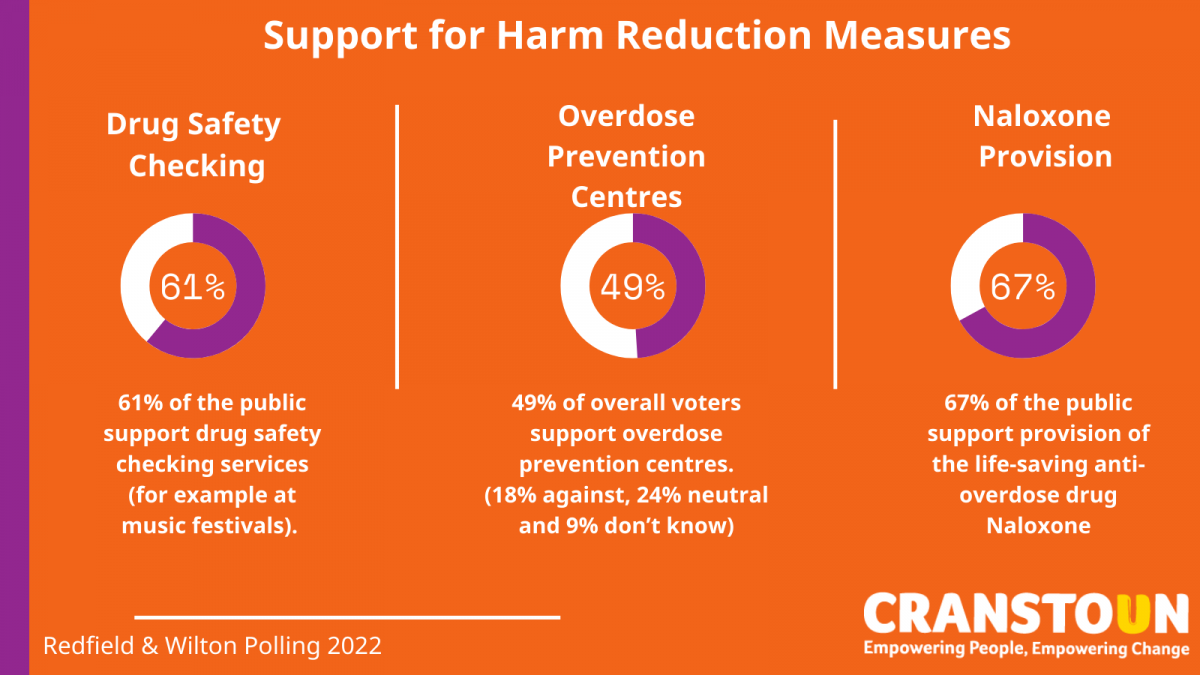 Other key positive findings from the poll revealed that 61% of the public support drug safety checking services, such as the work carried out by the Loop.

Promisingly, over two thirds of the public support the provision of the life saving anti-overdose drug Naloxone (67%). The high figure highlights the tragic prevalence of – sometimes public – opiate overdoses, and that the public want to help. The tireless work of naloxone peers, campaigners and training professionals over recent years has increased access to, training for and awareness of, the life saving medication. Cranstoun has also worked closely with police forces like the West Midlands to train officers to allow them to carry Naloxone as well as distributing it to people who may need it on exiting custody. Strong public support for accessing naloxone will likely make an enormous difference, potentially saving lives.

Combining these findings with aforementioned support for treatment and education solutions to minor possession offences, and strong OPC support – it is clear that the public care about those tragically losing their lives, and that many want measures that will keep people alive.

Overall, the findings from the poll shows that whilst there is still a division in many areas around how to deal with issues related to drugs, there is a clear acceptance from the public that the criminalisation of people who use drugs is futile and ineffective. Support for overdose prevention centres and naloxone provision highlights the generally positive, compassionate feeling from the public towards people who are suffering with addiction. It is also evident that a large percentage of the public generally see the benefits in addressing the root causes of drug-related crime, by supporting schemes that place addiction advisers in police stations to assist with treatment referral.

This comprehensive polling should empower policy makers and legislators across the country to follow the public, and global evidence base around diversion and measures, such as overdose prevention centres. Recent weeks have seen the publication of drug-related death statistics for England, Scotland and Wales, highlighting the worst figures in Europe. Measures which reduce the burden on the criminal justice system, encourage people into treatment and are proven to reduce harm and death caused by drugs can be implemented and expanded now.

The scope of the drug death crisis is tragic, as the Home Secretary recently pointed out, “drugs killed more people than knife crimes and fatalities on the road combined in 2020.” Today’s findings show the public care, and that they want to see tangible change to prevent these huge numbers of tragic deaths.