The Scottish Drug-related Death statistics were released today with the figures demonstrating a small decrease in drug related deaths for the year of 2021, compared to data from 2020, equating to 1%. A total number of 1,330 people in Scotland died from a drug-related death last year, compared to 1,339 in 2020. Drug deaths have risen at an alarming rate in recent decades, with there now being five times as many fatalities from drugs, compared to 1996.

Firstly, there will be relief within the Scottish Government that the figure has not risen again, having previously done so for the past seven years – dating back to 2013. The Scottish Cabinet will recognise however, that this is not a time for self-congratulation, with enormous amounts of work still to be done. One drug related death is one too many, and it is clear that now is the time for action – many of these deaths are preventable.

The situation in regards to drug-related deaths in Scotland has been at crisis levels for some time. The Scottish figure for drug deaths is 3.5 times higher than the rest of the UK, and the rest of the UK has a figure that is three times the next country in Europe, Germany.

The decrease in those dying from drug deaths is of course a positive, but it would be disingenuous to ignore the fact that comparative data for 2021 is not without external variables that must be considered. 2020 marked the peak of the pandemic, with services in Scotland closed for much of this time, so any meaningful analysis must consider these trends. 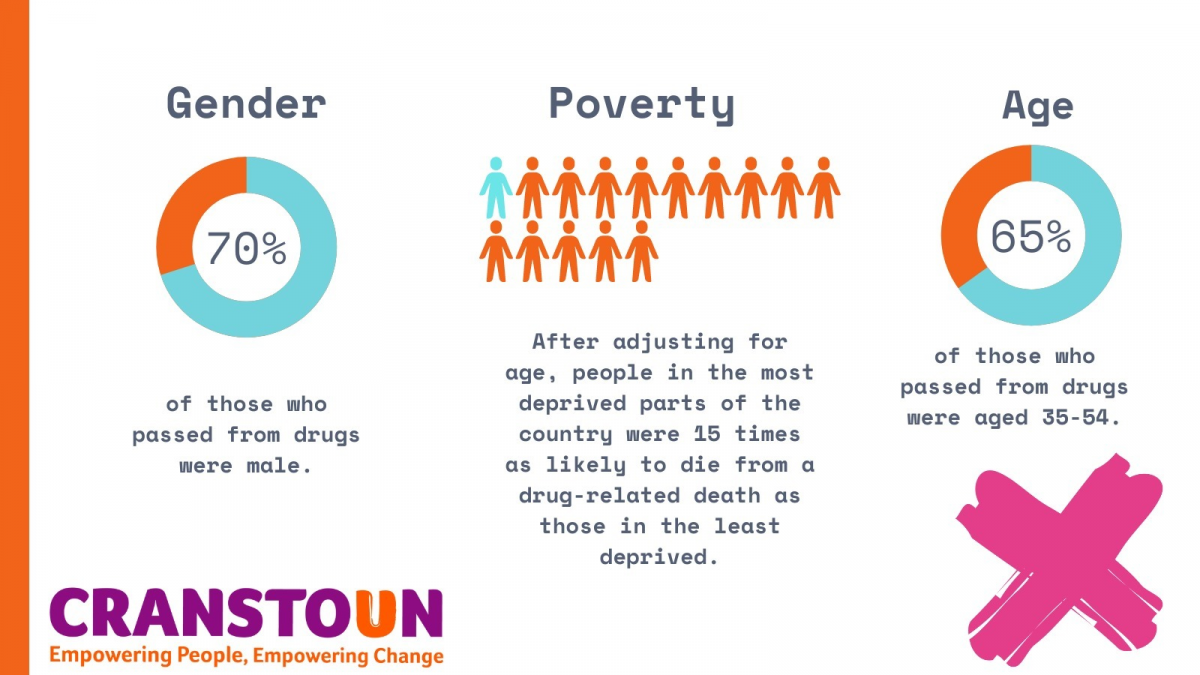 In short, comparing 2021 figures to 2020 – where external factors were so stark – does not necessarily help to unpack whether measures taken by the Scottish Government have had a positive impact. What is certain, is that more action must be taken.

Worryingly, fatalities where benzodiazepines have been identified in toxicology reports have risen by nearly five times in just six years. In 2015, there were 191 deaths but tragically today’s data reveals that 918 people died with benzodiazepines in their system last year. The figures also reveal that in over 9 in 10 of these deaths (93%), more than one substance was identified. Almost identical to last year, almost two thirds of those who lost their lives were ages 35-54, whilst 7 in 10 (70%) identified as male.

Attempts from the Scottish Government – and Parliamentarians across Holyrood – to address this crisis have been admirable thus far, particularly within the last 12 months, with cross-party support existing for a pilot overdose prevention centre. This time last year, the Scottish Government announced that they would look at existing measures elsewhere, such as diversion schemes, and Cranstoun has presented a model that is proven to engage people who use drugs at pre-arrest stage – providing harm reduction and education and preventing criminalisation.

It is also important to address the social issues related to these figures, with today’s data revealing that those from the most deprived areas of Scotland were a shocking 15 times more likely to die from drugs, compared to the least deprived areas. Shocking evidence of the clear link between poverty, deprivation and drug deaths. A holistic, Whole System approach must be implemented to reverse this trend by addressing the root-cause of the link between drug deaths and poverty, considering factors such as: housing, mental health, criminal records, career opportunities and education for young people.

With all of this context considered, the focus must be on how we address issues related to drug deaths in Scotland to prevent more tragic deaths, both short and long term.

Cranstoun recently visited Holyrood to campaign for the implementation of a Whole System approach to drug use that cuts drug deaths, halts the revolving door of crime, prison and addiction, and saves taxpayer money. We believe that the implementation of a pilot overdose prevention centre in the city of Dundee – utilising an innovative, peer-involved, hybrid-model – is essential as a key pillar to stop preventable suffering in Scotland.

Today demonstrates why Dundee is in need of impactful policies that will reduce this startling, horrific number of people dying from drugs, with the city having the highest rate when factoring in age-standardisation.

On our trip to Holyrood, we met with 33 MSPs, and managed to secure the signatures of 29 MSPs pledging their support for the Cranstoun approach. Our public affairs briefing, Connecting the Dots, was warmly received across the Parliament and continues to influence the political debate.

Policy makers are in agreement that the need to address the situation in Scotland is clear, with a strong belief that immediate action is required to reduce the tragic numbers of drug related deaths. No single measure will prove to be a panacea to address the Scottish situation, but a host of harm reduction interventions, alongside an OPC, will have a meaningful impact on drug figures for local areas.

These measures would include: furthering access to, awareness of, and training for naloxone, arrest referral schemes and education-centred, free, multiple-opportunities, pre-arrest diversion schemes. The utilisation of emerging technological-solutions should also be considered by the Scottish government to ensure that no one is injecting alone. Cranstoun is currently building an app which is proven to save lives in Canada, called BuddyUp.The app is due to go live in the coming months and volunteers are currently being recruited.

The overdose prevention mobile facility operated by Peter Krykant – OPC activist and Crantoun’s Project Lead – delivered almost 900 safer injections, reversing 9 overdoses directly, in less than a year. It is not just those nine lives that might have been otherwise lost, but the service provided safer injecting equipment, offered harm reduction advice and offered nutrition drinks and food to those who needed it.

Without the overdose prevention mobile facility, many would not have been engaged with any form of support. OPCs offer a golden opportunity for professionals to engage with people who inject drugs to educate on harm, offer safer injecting equipment and generally offer support in a holistic manner.

This example demonstrates why overdose prevention centres implementation, in the areas worst affected, is so key. A hybrid-OPC could serve a number functions that have been previously mentioned, whilst also providing safer injecting sites. In short, an OPC as the cornerstone of a new Whole System approach to drug use in Scotland, could have a major impact and would be cost effective to both set up, and when in operation.

Cranstoun will continue to push for the implementation of a pilot-OPC in Dundee, one of the poorest and most adversely affected areas by drug fatalities. We will also continue to champion our Cranstoun Whole System approach to drugs which would reduce drug deaths, reduce reoffending rates within the criminal justice system and save the taxpayer money. Whilst Scotland has made major strides towards a health-based approach in the last 12 months, the tragic figures show that there is still much more to be done and we implore ministers to continue dialogues with relevant third-sector organisations to ensure that no stone is left unturned in efforts to significantly reduce drug-related deaths.